Building local competitiveness is essential to enhance long-term national competitiveness. Last July, we re-launched the Liveable Cities Challenge (LCC) with the goal to help cities develop comprehensive, replicable, and implementable solutions to improve their liveability while strengthening local communities in the process.

Cities are the primary movers of economic growth and innovation. They are hubs of consumption, resource use, and waste. However, in this increasingly urban world, today’s cities are facing new challenges. They have become the nexus of society’s most pressing economic, social, and environmental issues. For these reasons, we need to plan them better. The Philippines, which is a nation of islands, needs to establish multiple economic hubs—the cities—spread throughout the regions so that we can disperse inclusive growth, opportunities, and development.

One of the challenges in urban development is e-Government. E-Government can be a remarkably powerful and important tool for cities to improve their overall governance. It is an enabler of reforms for governance, from improving systems, purchasing and payment arrangements, sharing of information, and doing business. It is critical to make the delivery of government services more effective. By improving cities’ capacity to provide services, achieve policy goals, and increase efficiency and transparency, e-Government encourages greater trust, participation, and engagement of citizens.

Great cities are not built overnight. But we can get started. In line with its re-launching, LCC conducted the first Liveable Cities Lab last November 17-19 at the Island Garden City of Samal, and Davao City. The event attracted over 60 delegates from 23 cities throughout the regions. The Lab, which focused on e-Government, served as a platform for sharing good practices and innovation on urban development. Experts from Microsoft Philippines and Highly Succeed, Inc. shared their experiences on how technology can be harnessed to improve and enhance the efficiency and effectiveness of government services.

The participants also toured Davao City’s Central 911. The Central 911 facility has grown from being able to address only emergency calls for criminal incidents to having the capacity to respond to almost any type of emergency. Aside from police services, it also caters to emergency medical services, urban search and rescue operations, fire auxiliary services, and K-9 units.

After the tour, retired Gen. Leoncio Cirunay of the Armed Forces of the Philippines showed a video briefing on the Davao Public Safety and Security Command Center (PSSCC). Gen. Cirunay discussed the salient features of PSSCC, and showed the participants how the facility contributed to the growth and development of Davao City. 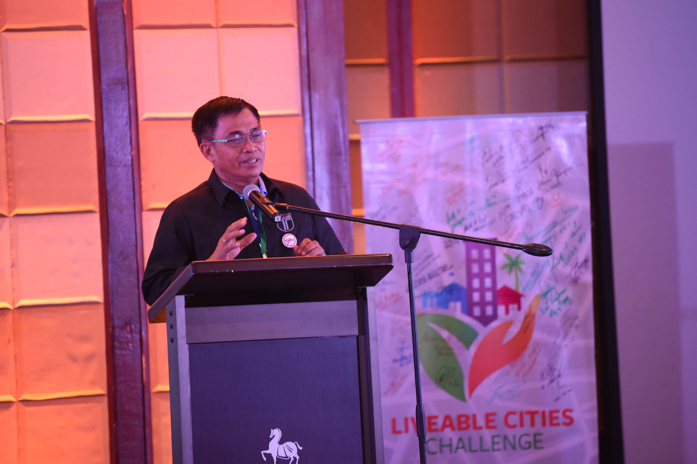 Subsequently, it was time for the participants to apply what they had learned in the course of the day to their own cities and pain points. The participants were tasked to propose an e-Government solution to the problems/challenges they have in their cities. Participants were then clustered together based on their proposed solution/project: Ease of Doing Business, Public Safety, Security, and Disaster Risk Reduction and Management, and City Services Automation. The clustering facilitated the exchange of ideas, experiences, good practices, and challenges. Jomari and Chie assisted the participants on this matter.

To end the workshop, Conrado Baluran, Coucilor-3rd District Davao City, delivered Mayor Sara Duterte’s message to the participants citing “we should continue to learn from each other to strengthen our communities and make our cities more liveable.” Usec Gil Beltran of the Department of Finance also expressed during his speech the importance of e-Government in enhancing the services of the local government units for its constituents. The participants also received Certificates of Participation, which were presented by Councilor Baluran and Mayor Francis Garcia of Balanga City, the Secretary General of the League of Cities of the Philippines (LCP).

Tony presented the learnings and insights gained from the workshop during the General Assembly of the LCP, held on 19 November 2016. He also presented the next steps and the timeline for LLC. Mayor Ed Pamintuan of Angeles City, the President of LCP, expressed his continued support for the initiative.

The first Liveable Cities Lab was organized by the National Competitiveness Council, Ayala Corporation, League of Cities of the Philippines and Microsoft.